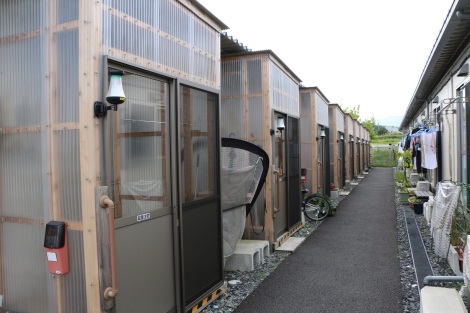 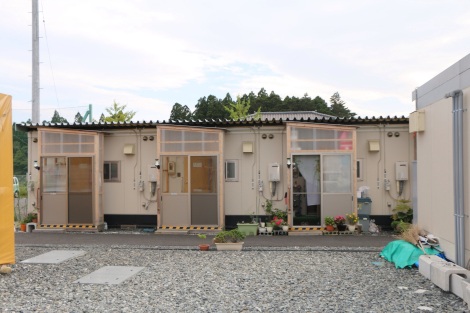 Many survivors of the 2011 earthquake and Tsunami in Japan are still living in THU. In each cluster of between 50-100 units of THU there is always a community hall. This in the community hall we use to conduct events for the residents. Compared to those of some third world countries , you would probably think that their accommodation is quite good. ( what is good accommodation is relative ).
From the way things are , they will have to stay in these THU for the next 2 to 3 years as no new housing are being built yet. ( news that some land are being set aside for reconstruction ). For some who have the means , they have already moved on to built their own houses in other places.
Psychologist tells us that many of these survivors are in a dangerous phase of their trauma from the tsunami . After 2 years , all the hype about their plight have cooled down. In the initial first couple of years everybody is concern for them, they got help and attention from many people. By now most aid and humanitarian agencies have pulled out . Even volunteers come less often. The news don’t mention much about their plight and govt seems to be busy with other problems their nation is facing.
Meanwhile , those who are better of have moved out of THU. This is the period where many of them will feel lonely and have many regrets . This is the time where they feel life is a bad deal , there is no hope and they are most prone to attempt suicide.

The grief and pain of suddenly losing all your possession and for some , love ones as well , is not something a person can easily forget or overcome. ( especially when they do not know Jesus , they don’t have HOPE ) .

Recently, I was very impressed with a Brazilian/Japanese ch who are from near Tokyo. Every month they will send volunteers from their ch , drive 7 hrs from Tokyo on fri night , serve the people in the THU on sat and drive 7 hrs back to Tokyo on Sat so they have ch on sun.
Wow , that is love in action. I hope more Jap pastors will bring their members to serve in the THU . This is the window God has given us, opportunities to demonstrate that there is a true God who loves them and cares for them.